The new PhotoShelter. I think I’m going to need a bigger phone., originally uploaded by stacyrosenstock.

This week PhotoShelter unveiled their long awaited upgrade. I had been looking at various ways to upload my tweeted photos directly to my website so yesterday morning I decided to try it by uploading a test photo from my iPhone. One obvious problem with tweeting to Flickr, and then blogging, is that it automatically posts & tweets immediately, which is NOT what I intended to do. No time to fidget, edit or fuss.

My test photo arrived but once it was on the site it was nowhere to be found. And to make matters worse, I felt like I was going blind searching through various folders or galleries, or whatever they’re called, in the new interface on my tiny iPhone screen.

Once back on the computer I was finally able to upload directly to my iPhoneography gallery, via Lightroom, which gave me a hint as to the direction I might want to take. Either way, March has been a very long month and I think it just got a little longer.

So here’s my very first blog post from the new PhotoShelter. There no longer seems to be a direct link to blog images..or my display is too tiny to see it. Keeping my fingers crossed that it works.

Kodak announced March 1st that they planned to discontinue Ektachrome, their color reversal film. This comes on the heels on Kodak filing for bankruptcy, a month after the company announced they would no longer produce cameras,  and less than three years since they stopped making Kodachrome.

For many many years Ektachrome was the film you could get processed at a local lab, in three hours or less. It was an alternative for photographers who wanted to depict the world as something other than a sunny day. It was the film I used while working in the Art Slide Library, at Hunter College. It was the film I used as a child, getting slides that I could see in the viewer I’d won in a contest at Willoughbys.

While Kodak says they’ll continue to provide the E-6 chemistry necessary to process color transparency it does make us wonder if the days of film and wet darkrooms will soon go the way of daguerreotypes and wet plates.

New Yorkers have no patience for tv or film production. Drivers can’t park. People can’t get where they need to go, things that need to get done don’t happen. Twentysomething PAs will even grab passersbye expecting them to stand in as an extra. One week last fall the NYC Mayor’s Office on Film and TV announced there were 21 companies filming in the City, all at the same time! We couldn’t help but laugh when Occupy Wall Street ran through the set of Gossip Girl, or when they occupied the mock-up of Zuccotti Park for Law & Order SVU, dubbing it Mockupy.

This distain runs so deep that one of my neighbors, upon graduating from film school, named his company Not in Front of My House Productions

But New Yorkers don’t hate all film productions. We judge.
People don’t seem to mind when Law and Order SVU films around the corner (on someone else’s block.)

Several months ago word began to spread the Coen Brothers would begin production of Inside Llewyn, based on the life of Dave Van Ronk, the mayor of MacDougal Street. I remember Van Ronk from the nights I spent in MacDougal Street basket houses, so when the signs went up announcing another film production on my block I felt a mix of excitement and trepidation. Sure enough when I stepped out the door today there was Oscar Isaac walking down the street, cameras rolling. Many many years ago, we’d joke about somebody making a movie about the MacDougal Street music scene, but I never imagined it would happen on my doorstep.

I never did get to see JT but I grabbed a few shots of vintage cars in the rain. Seeing your neighborhood on the big screen or even tv never gets old.

Back in the days when New York had more Optimos than Duane Reades, these wooden icons of Native Americans graced the entrances of smoke shops to evoke the aura of Native Americans and Europeans sharing the peace pipe. Carved from wood they range from two or three feet tall to full life size. Nowadays they’re more like American folk art, cherished by some and reviled by others.. While some consider them racist stereotypes, not unlike Black jockey lawn ornaments, there are still a couple of Greenwich Village smoke shops that continue to display this symbol.

Walking through the Greenmarket I spotted some barrels of veggies and rice, waiting to become compost. Probably the prettiest garbage I’ve seen in quite some time.

As a homage to John Lennon and Yoko Ono’s 1969 Bed-In, Revolutionary Games, a sub group of Occupy Wall Street, set up a bed in the fountain of Washington Square Park today,inviting passersby to hop in and join them. Maybe I should’ve worn my pajamas?

Last Fall I was riding my bike through Brooklyn and spotted this house. Didn’t have my Nikon with me and the light was less than perfect, but since I don’t get to this part of town all that often I decided so grap a few shots with my iPhone – more as a memo to return.

One thing I’ve discovered about iPhoneography is there seem to be endless possibilities. I wasn’t entirely satisfied with the first time I processed this image, so I decided to try it again. I think I like this one… today

Madonna fell, M.I.A. gave everyone the finger, Nikki Minaj was gorgeous, but Ceelo….? Maybe he decided to keep a low profile after his New Years Eve fiasco mangling the words of John Lennon’s Imagine?

Venturing out for a Shwarama at Mamoon’s, the streets were empty, save for a few tv deprived hipsters peering through the window of bars to keep up with the game. The Empire State Building was gorgeous in Blue.

I confess. Madonna is one of my main guilty pleasures, so I couldn’t resist catching the half-time show on YouTube. And while her performance wasn’t as free flowing as Vintage Madonna, she can still show GaGa how it’s done.

As for M.I.A…. what’s a nice radical girl like her doing on the mainstream Super Bowl Half-Time show anyway?

It’s superbowl sunday and nothing is on tv. Nobody on the street and the City’s turned blue. Everyone’s prepping for the big game. Since I live in a Football-Free-Zone I decided to get caught up, or a least make a little progress, on the photo tasks of the week.

Getting work back from an agency is never fun. Nowadays its more about real estate. Nobody wants to give up the space it takes to store old media. This week I finally received two long awaited packages via First Class Mail and UPS.

Sunday afternoon I finally got around to counting them… my iPhone’s calculator crashed three times in the process. Apparently it doesn’t like numbers over 2,000.

And I had to pull the cat out of the box. Little Miss Kitty just presumed this cat size box must be for her.

Now I have to figure out where to put them. One friend suggested I might “Edit edit edit!”

Saturday in the Park 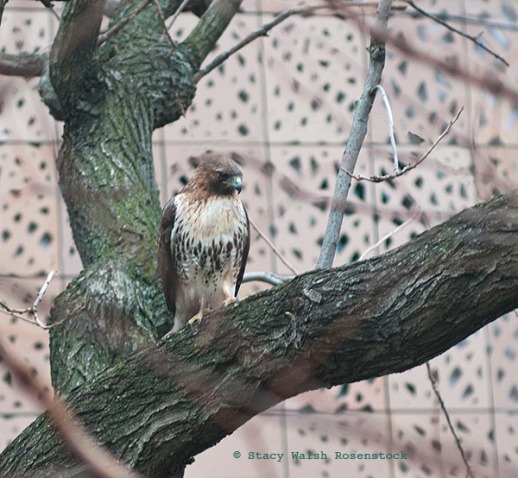 Took my usual short cut through Washington Square today and noticed a gaggle of tourists gathered just east of the Garibaldi Statue. There on the grass was Bobby, the remaining Red Tailed Hawk, who has taking a liking to the neighborhood.

Then on the way back home, there he was again, rapidly gathering the interest of a half dozen hawkarazzi. Unfortunately, I was traveling light, and my longest lens was only the 35 – 70 Nikon. Much to my surprise Bobby let me get pretty close and I was able to grab a few frames. Maybe I’ll return tomorrow with something longer.